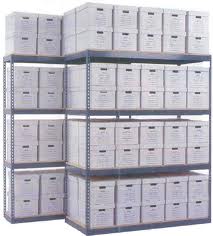 Tens of thousands of boxes filled with sensitive and not-so-sensitive city of Miami documents, from personnel files to scribbled notes taken during garbage truck oil changes, are being held hostage at a storage facility in Broward County, the city says.

But the owner of the facility has another story: The financially strapped city owes $340,000 and can’t get its records until it pays.

The unusual dispute has meant that, since December, Miami attorneys have had to make public records requests for the city’s own public records.

Iron Mountain responded to an interview request in a one-sentence statement.

“We are in the middle [of] good, productive discussions with the city of Miami on this issue and hope to resolve this soon in a way that is mutually beneficial,” the company said in a statement.

Yet the sides seem to be a long way off. Miami believes it only owes Iron Mountain $22,000.

The lawyer said the company claims Miami owes a retrieval fee, a permanent withdraw fee, past due invoices and that the city can pick up a maximum of 1,500 cubic feet per week, or 150 boxes. Xiques wrote that Assistant City Attorney Henry Hunnefeld has only been able to obtain a handful of boxes through court order.

Since then, Miami has stored its documents in the company’s Broward County facility and has paid the firm $357,158.07. The price was based on an as-needed basis.

When the contract ran out in December and Miami chose a different vendor, Iron Mountain and the city began to bump heads.

Miami demanded all of its boxes — estimates run as high as 40,000 in all — but was rebuffed by Iron Mountain, which is insisting on a $200,000 termination fee.

Bru and City Manager Carlos Migoya argue the city doesn’t owe the money because the contract expired; it wasn’t terminated.

Meantime, the city continues to encounter hurdles to get some files.

City Manager Carlos Migoya recalled not being able to obtain a personnel file for an employee up for a promotion. That promotion was almost awarded, until an outside source told the city of a prior indiscretion.

“Who knows what happened 15 years ago?,” Migoya said.

Prevent this from happening to your company!  Save money and aggravation with our easy Cloud-Based Document & Data Storage systems!